Defying apocalyptic predictions, Colorado was not particularly hard-hit by the Coronavirus. The number of cases and deaths per capita were in the middling part of the U.S. range.

Moreover, in Colorado the virus is nearly dead now. A website set up by the state showing virus data over time shows this: 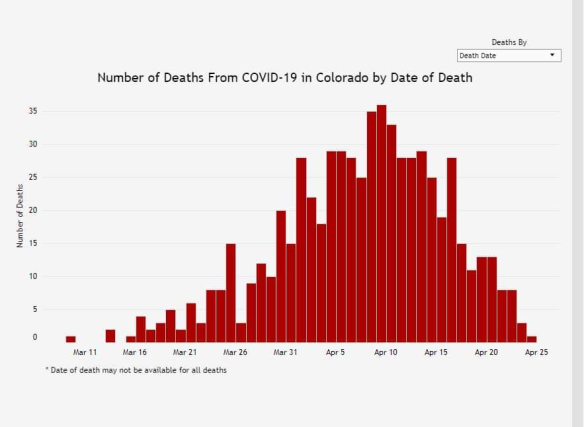 It can be seen that the daily death toll follows the classic bell-shaped curve that epidemiologists learn in med school. If anything, it’s better than one might hope for, in that the decline in right-hand part of the curve is steeper than the increase in the left-hand part. Yesterday, the death toll was zero.

One might think that the state’s largest newspaper would see this as news. They don’t. END_OF_DOCUMENT_TOKEN_TO_BE_REPLACED

Jim Jones was a socialist cult leader in the 70’s. Harkening back to Karl Marx, he preached that “those who remain drugged with the opiate of religion have to be brought to enlightenment – socialism.”

He hobnobbed with politicians like Walter Mondale, Rosalyn Carter and Jerry Brown. To pursue socialism, he set up a commune in the jungle of a South American banana republic. He was in charge, naturally, and named it “Jonestown.”  Assisted by endorsements from his politician friends, he persuaded some 900 American followers to emigrate to there.

The residents got high and watched Soviet propaganda films about America. Jones ranted over loudspeakers day and night about imperialism and capitalism. Much of the money for Jones’ anti-Americanism came from American taxpayers. The residents signed their welfare and Social Security checks over to him. END_OF_DOCUMENT_TOKEN_TO_BE_REPLACED

The virus is well past its peak in Europe, especially in hard-hit Italy and Spain. America is a week or two behind the European infection and death curves due to President Trump’s prescience and courage in imposing travel bans which were widely mocked at the time by TDS sufferers, some of whom later became Chinese Virus sufferers. But in America, too, it’s leveling off and will soon decline.

And now, early results of treatment with a bioengineered drug are very promising. The drug is inconspicuously named Remdesivir and was invented and made by a biotech company improbably named Gilead. END_OF_DOCUMENT_TOKEN_TO_BE_REPLACED

I’m no saint. In fact, I’m a seriously flawed human.

Which brings me to Joe Biden. END_OF_DOCUMENT_TOKEN_TO_BE_REPLACED

The Aspen Times is on hard times and wants a bailout.

In case you’re not a gazillionaire, or in case you’re an unwoke one, Aspen is a rich ultra-left resort in the Colorado Rockies. Democrats outnumber Republicans about two or three to one.

Which brings us to the newspaper, the Aspen Times. They’re woke for sure. END_OF_DOCUMENT_TOKEN_TO_BE_REPLACED