I don’t think Barack Obama was born in Kenya.

And yes, he refuses to release his college transcripts, as other presidents and candidates have done. But I’m guessing that’s because they show poor grades and not because they state he was a foreign student.

And yes, for many years he attended a church where the pastor sometimes exclaimed, “God damn America!” but I think he was just trying to fit in.

No, I don’t think he’s Kenyan.

But I wonder whether he’s Manchurian.

“The Manchurian Candidate” was a END_OF_DOCUMENT_TOKEN_TO_BE_REPLACED 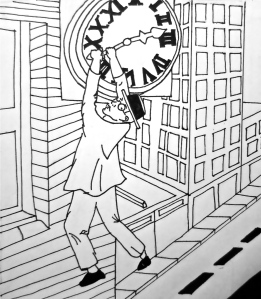 It’s been a week now, and the government still has not returned the hour it stole from us on March 9.

They call it daylight saving time. Like all wonderful government institutions — from the IRS to the TSA — it goes by an acronym. It’s “DST.”

It’s a “savings” in the way that government spending is an “investment.” Each spring they steal an hour of our life. They return it — without interest — in the fall after everyone has finally gotten accustomed to its absence so that everyone can then try to get reaccustomed to its presence.

As always, they deny it. They say it’s for our own good — just like the mandates of Obamacare, the ban on big sodas and Aspen’s monstrosity of an art museum.

The Camino de Santiago — a talk and slide show by Glenn K. Beaton on March 12, 2014 at the Aspen Center for Environmental Studies.

The Camino de Santiago, a half-thousand mile trek is an ancient pilgrimage dating back to 900 A.D. It starts at the border with France, climbs over the Pyrenees and then follows back roads, trails, paths and even the ruins of Roman highways across northern Spain.  Along the way are the ruins of medieval villages, monasteries, castles and the great cities of Pamplona, Burgos and Leon. All of which is interspersed with tapas, orchards, vineyards, fantastic local wine, rain, relentless foot-pounding and ridiculous stories.
Glenn Beaton, a contributor to The Wall Street Journal and a columnist with the Aspen Times has walked the Camino by two different routes in the last two years.  His most recent walk last fall was the subject of a five-part series in the Times. Join Glenn for an adventure through Spain.

Tea, donated by Two Leaves Tea Company and Paradise Bakery cookies will be offered during lecture.

Let’s check in with the local government spenders who hatch ideas like laying colossal, concrete eggs around the bus stops, burning fossil fuels to heat outdoor playgrounds abutting the highway and building bus stops with big quarter-million-dollar phalluses to compensate for the little quarter-inch ones in their pants.

First, let’s be clear on terminology. As a brand, “bus” isn’t cool. No one wants to ride a bus called “bus.” And “RFTA”? Forget about it. So the bus guys paid a consultant to come up with the brand (another drum roll) “Veloci-RFTA.” It came with a chicken-shaped dinosaur logo.

That’s right: the bus guys who will save us from global warming/cooling/whatever, named themselves after an extinct chicken-shaped dinosaur that failed to survive a climate change 66 million years ago.

You probably think that visitors from Austria and Japan who want to get around town are looking for a vehicle that regularly stops at a sign with the letters “B,” “U” and “S” in approximately that order.